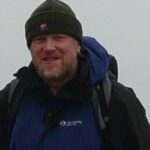 @russ Yeah I sure am having fun with paint at the moment. 🤘😁🤘🎸

@rocknroller912 I just wanted to try something new instead of choosing a more traditional finish. I’ve got loads of ideas and another one came to me actually as I was painting this one. This is what Mark has always said, “You can do whatever you want”.

So what colour/s will it be when you've finished it??

So what colour/s will it be when you've finished it??

Well, you’ll have to wait and see, it’s not finished yet.

Is this a new phrase now? 🤣

I know some people will not like it but it doesn’t matter, I’m experimenting and loving it. No harm in trying something new and there is bound to be someone who will like it. 🤘😁🤘🎸✨✨✨✨

I should have caveated the "good thing" comment with "that's just my opinion, other opinions are equally valid"

Just imagine if no-one had ever experimented.  Guitars would still just be solid (car) colour paint jobs.  How boring would that be!  You've got the skills, the time and the equipment, so it's great to see how those come together on a guitar.

(the above is just my opinion, other opinions are equally valid). 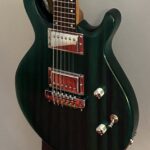 @boo love the idea, looking forward to the finale! Not sure I’d get away with hanging it in the living room though 🤔

With Mirka though, whichever one you use, they are top quality

There are a few videos on YouTube with a rather different opinion on the reliability of the electric mirka. I don’t have enough info to say how common the issues are.

That finish reminds me of the artist’s technique where they lay down some colour on the paper, then paint over with black, and then scratch out the image revealing the colours beneath

There are a few videos on YouTube with a rather different opinion on the reliability of the electric mirka.

That's exactly the reason that I didn't buy one @jonhodgson.

But then the thousands of people who don't have an issue, don't bother putting YT videos up.

And my neighbour is one of those thousands.  He has the electric version and loves it - and he's a pro cabinet maker, so his Mirka gets a *lot* of use.

I've still not bought one though.

There are a couple of videos where someone tries an alternative from China, for a fraction of the price. It doesn’t seem to be quite as nice, but even as a lover of Gucci tools I’d have to think twice about whether the Mirka was worth it (the less nice bits were in handling, not performance)

The thing is that if there are a few reviews on YouTube about people reporting faults with their Mirka sanders and thousands of people who have them and don’t have problems, then the maths speaks for itself. If the faults were prolific and too common to ignore then there would be a plethora of reports from all over the world, but, there isn’t.

The other way of looking at it is that, if you don’t try, how will you ever know?

I think with most products on the market, the vast majority of units sold are as advertised, they do the job they were designed to do. There may be an odd one or two that, for some unknown reason, have a problem and conk out (technical term). I’m sure that if you went through forums for talk about cars for example, some people will report a problem with this and that but the vast majority of the car owners are happy so they don’t report anything. You could apply this principle to anything out there. People talk about problems with computers, where comment sections and forums are full of people reporting problems but nobody really reporting the good stuff. The whole world (human invented systems) is run on computers these days and if the negative comments had real validity then why does more or less every industry employ them? There is a lot of talk and conjecture, but not really any real cause for concern.

Unless there is a particular design fault that manifests exactly the same failure on every single unit, every single time, then there is no reason a product shouldn’t be given full confidence in the market. There would be a big scandal in the press if a huge international company like Mirka were supplying their products across a vast array of industries that use their products only for them to conk out all the time. If there was a big design flaw, they would have no choice but to give a press release, recalling one or many of their products.

For a handful of units that do break down because of some arbitrary reason, it is covered by the warranty system.

There is being sensible and cautious and there is being so over cautious that you hardly buy anything because you listen to too many opinions that may or may not be true.

There is a definite problem in this world that not enough good reviews are advertised. The internet is turning out to be an extension of bad news tabloid newspapers, just look at social media.

I have talked about how good my Mirka sander is before on here so I won’t go on about it again. I will say though that, as far as I know, we only live once in this world so I’m not hanging about listening to negativity. I need to stay positive and contribute what I can to making this world a better place for those that follow. I want to leave things better than when I found them and that is not gained negativity.

If you have the disposable income, don’t sit on the fence, buy it, use it, love it!

don’t sit on the fence,

At least, not before you've sanded it smooth with a reliable sander - you don't want splinters there!!!

At least, not before you've sanded it smooth with a reliable sander - you don't want splinters there!!!

. I want to leave things better than when I found them

...by leaving more hand crafted guitars in the world 😉🙂

by leaving more hand crafted guitars in the world

Just had time to open a mystery parcel this morning.

@tv101 Thanks very much for these routing templates, a LP is definitely on my todo list. At some point I will need some of those stepped templates for the carving bit on the top but I need to do my homework on how to build a LP first. There is a lot of research needed first before I can even think about cutting any wood.

I really appreciate this T, it has inspired me to make it happen. 👍

I was going to recut the wonky one, but then realised that I didn't have any more of that ply knocking around.

And you'd want to do your own thing with the control cavity and layout anyway.  Won't you??

I'm hoping to find a CNC plan that I can use for that.  I've done a couple of carved top LPs/LP-alikes, and the carving/sanding took longer than the rest of the guitar!

I've done a couple of carved top LPs/LP-alikes, and the carving/sanding took longer than the rest of the guitar

In between work and taking the cat to the vet, I’ve been sanding this ridiculous thing today, I’ll flow coat it over the weekend.
P600 grade on the sander. 👍