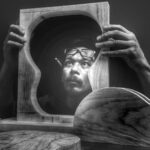 Thank you Mark. Have not even properly intonated it yet and it sounds Immaculate already!

My best guitar yet, now I am gonna take a stab at your acoustic. Here we go. Guitar revolution is at hand.

That's just about perfect to my eyes!  Love the colour, the matching headstock (front) and the cavity cover.  Quality.  The contrast on the back of the headstock is a great touch.

Semi-hollows are obviously the "right" design.

Single pickup is the right option, and the pickup ring is another piece of quality.

That's a fantastic piece of work there Clinton, absolutely stunning.

Hi thanks all. Everyone here has been very inspiring. I got myself a Bailey design Bandsman!!! 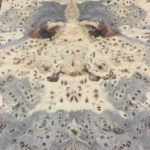 If you will forgive the tmesis: it is absofuckinlutely beautiful. One for generations to appreciate. Well done.

Here is a link to my Bandsman build journey

Excellent video Clinton. Am I right in saying that you've put a lacquer finish over Danish Oil, can we do that? Maybe Mark will do a finishing course soon.

Maybe Mark will do a finishing course soon.

Thanks Clinton, thats good to know. I'll try a little test peice and see how it goes.

@robin One thing with spray can lacquer, super thin coats at a time. Fo not go heavy. If you get a run or a drip,  Leave it alone. Let it dry.  I posted a thread on a tip on how to fix that on a forum post regarding preferred finishing.

@clinton Absolutely fantastic build, truly amazing! Well done sir! It has already beaten what my Bandsman build will be. I’ll plan something like this on a future attempt.

I’ll plan something like this on a future attempt.

@tv101 Well, mistakes do happen and far from perfect. 5 major careless errors were made. The most major error was thicknessing the headstock. I set my depth stop and made a few passes and on my final routing depth as a routed I noticed immediately that it seemed too thin. True enough, it was at 12mm. Come to realize I did not tighten my depth stop and had moved as I was making my initial passes. It’s too thin for strenght and just looks wrong if I rolled with it. I temporarily glued on a piece of koa butted it to the start of the volute, copy routed it to the shape of the headstock and would think of a way of dealing with it later as I carved the neck. Volute as it took shape and looking at it on it’s side did not look pleasing at all. So I resurfaced it back to 12mm. I decided to steam bend a 4mm piece to cover the whole area of the back of the headstock and it would thought that it would make an interesting contrast. Now the gard oart. The trick is, I needed a piece that is hard enough to strenghten it but soft enough to be able to bend the sharp angle of the volute. My best option was Walnut and so I did just that.

The other mistakes when I was carving the neck, I scuffed the heel block pretty good with the rasp. I sanded it off but left an angle and upon gluing the neck left a tiny gap on the bottom of the glue line. Not bad but annoyed me, I covered it up with a piece of Walnut veneer and was just enough to hide the gap. Turned out nice and made it match the back of tge headstock as if it was meant to be.

The other mistakes is that I rounded the upper horn of the body too much and had no flat spot at all for the strap button. Unattachable and since the guitar has been finished already, did not want to resand just for the flat spot, instead I placed the strap button at the back which I do in all my builds anyways but The Bandsman has a small body for that. Kinda strange at first but not too bad to get used to. Now however, the Koa neck dives. Minor. Lastly my 3 way switch is placed too close to the strumming area. Takes a little getting used to but not bad. Lastly measure twice and cut once. My bridge holes were 1.5 mm off center and just enough for the strings to be off kilter. Plugged it up and re drilled.

Used a gauge chisel clamped to fasten the starting point of the volute. Worked like a charm.

Well, mistakes do happen and far from perfect

Thanks for documenting your errors and how you've overcame them. Despite the mishaps, your guitar looks stunning and your save on the back of the headstock looks so good.

@robin some things are meant to be and actually looks better. Nice contrast.