A workshop was born 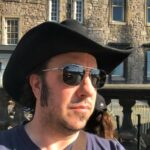 I've been thinking about this for a few years and finally took the plunge, sought out and bought what thought I needed to get going and also cleaned a space in the shed. There's still a whole bunch of things I need, like router bits and about a million clamps oh, and an actual workbench but it's a start.

As a teenager in the 90's I've always been a fan of James Hetfield and Metallica, hence the explorer obsession. His Ken Lawrence guitars always blew me away and I watched an interview with him in his workshop talking about where he started and it planted the seed of an idea that maybe this was something I could do one day. Obviously there's years of dedicated craftsmanship in his work but like I always tell my kids 'There was a point in your life when you couldn't use a spoon' And one thing I love about Mark is his firm belief that anyone can build a guitar. Even me.

Well as you know, I've got a body blank and the plan was to start simple, build a body and buy in a neck. But after watching the videos on the course, I'm going to buy a neck blank and pre cut fretboard and just go for it.

Thanks for all the help and advice so far Mark, I'll certainly keep you updated as I go.

Looks good. How big is your shed? I've got a wee 8'x10' shed which looks a bit tight stuffed with a lawnmower etc.

I never want to see it that tidy again!

I do solemnly swear it never will be.

After my first Bailey course, I went home and dismantled the unused potting shed that we'd put up on a concrete base.

I then ordered a massive shed, way bigger than anything I'd ever need.  I think it was 10' x 8'.  I packed it with polystyrene and then ply lined it, and put OSB down on the floor.  It was a great shed.

I then filled that shed with all the workbenches and tools that I owned, and played football in the other half.

Over the following few years, I acquired more, and/or bigger, tools.  And stocks of wood.  And then more and bigger tools.  It got to the stage that I was spending as much time moving stuff around to create enough space to do some work, as I was spending on doing the work.

When we moved, lesson learned.

As it happens, we moved to a place with a larger concrete based already in place, so I took the opportunity of getting a bigger shed - so big, that it's now called a "workshop" - way bigger than anything I'd ever need.

I filled the workshop with all the workbenches and tools that I owned, and played football in the other half.

Naturally, 4 years later, I'm now trying to work out how I could extend my workshop into one that'll actually be big enough.

Morale of the story - you'd be amazed at how little space you need, and how much you can occupy.

@cheesewhisk That’s a decent sized work shed for building guitars in. I’m lucky that I have a decent garage to work out of and a small bedroom in the house I use for the less messy jobs. I’ll be moving house in the not too distant future so I’ll be starting again, I will have something built.

As promised @markbailey it's now a complete tip again.

Today, I built my bench, setup and tested out my very first bandsaw and actually made some sawdust.

We are now, officially cooking on gas.

Is a tree as a guitar an ambition fulfilled? And is the sawdust jealous?

The picture of the sawdust is great!

So what are you planning for your first build?

Brilliant! I've kept sawdust in old coffee jars just in case. That's why there's not a lot of space left. Oh and I have an area just for clamps. There's a story about clamps but my memory fails me at the moment.

Mark's confidence gets you through those times when aspiration outstrips ability. Then you sus it out and remember to point the sharp end away from your hand. 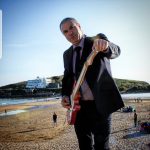 I'm going up a notch with regard to Planer Thicknesser.

Anyone have any experience with either of these?

@mattbeels still at the designing stage but I really would like to build an explorer, just not sure it's that sane for a first build.

I don’t have any experience with Axminster as I’m not in the UK but Scheppach is a German brand. I have a old scroll saw of theirs, works ok.

I’ve heard mixed reviews about their newer tools, mainly “not what they used to be” type comments.

They used to be a mustard color and the newer ones are blue but I imagine they still probably make good stuff. I’m not sure if it’s still made in Germany though, but if it’s good quality then it doesn’t really matter.

Metabo is another classic German brand and I have a lot of their stuff and it all works well, even the newer Chinese made.

My router is an old German made model. I bought it used 15 years ago for 75€ on ebay and it still works like a charm.

I just googled that machine and it’s an old one, here’s what I found:

The Scheppach HMS 260 jointer planer is the smallest of the HMS series. In contrast to the larger versions (HMS 3200 and HMS 4000), it does not come with an integrated stand. It is however the only one with a possible table extension.

The tables are made from sheet metal, and not cast iron or cast aluminium, making them more prone to dents and bending, as well as rust. The feed rollers for the planer have a rubber coating, which tends to degrade over time, requiring a relatively costly replacement.

Another difference with the HMS 3200 and HMS 4000 is that one half of the tables needs to be completely removed to switch from jointing to planing mode.

This machine was still produced in Germany in the early 90s, before they started producing mostly in China. It was succeeded by the HMS 260 ci, which had cast iron tables.

My first build was a neck through Explorer so...

It might be “wiser” to go with a simpler style first to get your feet wet but if you feel up for it then I say go for it!

It really isn’t a big deal, it’s just a body shape after all. A bit more work but so what, right?

I'm inclined to the local Axminster equipment because their customer service has been good for me over 25yrs now.

I get the impression that Axminster is the UK equivalent to Grizzly in the US. I have the feeling that they make good stuff but I’ve never seen their tools over here so I’ve never bothered to research them.

Coming from the states I know Grizzly to be good. I really wish we had a company like that in Germany...

If I had room I'd always choose Wadkin 4 phase.

Axminster Craft has good reviews, but it's all in the setting up.