Thanks to Carol and Mark for your help with this. Just a heads up here. Always use 1/4” cutter and not 6mm as it will be too tight and this happens. Cheers

@powerful Nice! Good tip on the router bit! thx that will prevent me from making the same mistake.
Looking forward for the next steps!

Second attempt at posting. Soundboard and back braced and carved apart from the x braces. I’m leaving those until the sides are done. There’s more involved with this stage than meets the eye it’s NOT as easy as Mark makes it look but if you follow what he’s doing you can get an half decent job. I found I was about 3 mm off centre when I put the x braces on but it doesn’t seem to affect things as yet but I’m prepared to eat my words later. Sides next. Wish me luck. Cheers 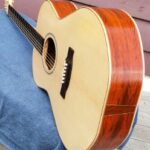 @powerful Well done for taking this on, I look forward to watching your progress. Good luck man. 👍

@powerful awesome! that is looking pretty good to me. Cant wait to see the next stages 🙂

Hi. Took a massive leap of faith yesterday and bent the side’s with near disastrous results. However after sleeping on it and revisiting the job today I’ve managed to tease them close enough for the next stage. This is the first job so far I’ve lost sleep over and I’m not that far in. More to come I think. Thanks

Nice @powerful ! what was it that made it almost disastrous ?

@koendb firstly I had the iron too hot and ended up with scorch marks although these were mainly superficial and sanded out ok but my perception of where the bends should be were quite a way out and the two sides were way out of sync with each other. I had to straighten and re bend to get the sides to fit the template. It took some doing but steady away and it did come together. It’s to about 3 mm in places so should be able to fudge it about

If those pics you posted were of the "near disastrous" first time that you've tried bending sides, and then the morning-after re-bend, then I think you put that down as a big success.

OK, there's some variation between the two sides in the first pic, but - if that's a first attempt - I'd say that was pretty damn good and certainly a long was from being a disaster.

And there are few real disasters in guitar-building.  There might be plenty of "learning opportunities" though 😉

@powerful. Those sides look great. When doing the first one you really have no idea of how far you need to bend to get it close. Watching Mark do it on the course, and when he gets it so close the first time, it just looks soooo easy. But you forget how many sides those hands have actually done. My first guitar sides I bent I was happy that it went all "bendy" and I curved it to where I thought it should be. Held it up to my pattern and went... well... that doesn't look right. Then unbent it... then bent it... then unbent it... and so on. That's when I seen all the little flat spots. However that got me to learn how to use my bender. My second guitar sides I did came out sooo much nicer. Maybe it is the confidence of feeling it bend before... I don't know.. but it was a lot easier and a lot less scary on the second guitar.

@tv101 Yes first time doing this but I think I've managed to get a result but I don't mind saying it was a very stressful experience. Fingers crossed it goes together ok. Thanks

@bpower Thanks. I hear what your saying. I thought It was never going to take the shape.. Whenever I changed one part another moved out of place. So back and forth like that. That being said, I should be able to clamp nicely into position when the time comes. Cheers

Blocks now on and x braces carved. Offering up the sides I need to tweak around the waist. Trouble is the kerf lining is on so might be a bit tricky but I’ve got to have a go. Need a bit of advice from mark on this I think. Cheers